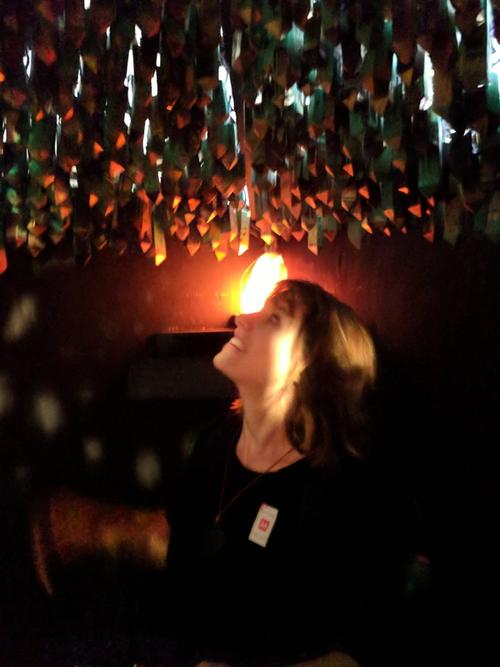 What brings you to the DH Lab?

I was really interested in the DH Lab because there was a possibility of instructing and I’ve never done that before. Digital humanities is exciting because it's so vast and you can do so much by mixing any kind of discipline with anything digital. So much of it tends to be new because the digital landscape is pretty new still, and so there's a lot of promise there. I sort of found myself in the last many years in that DH space, and I really like that this job offered the space to expand on the kind of work that I was doing before but in this more intentional way.

Could you share a little about some of the past projects you’ve worked on?

I was a designer and lead creative technologist at the Library Innovation Lab (LIL), and so that meant doing a lot of collaborative projects. For most of my time there I worked on the Caselaw Access Project, which is digitizing and making available all of the United States case law, opening it up to the public. The big deal about that was that publishers have had a monopoly on publishing case law—which is our law!—and it was highly inaccessible to anyone outside of extremely well-to-do institutions. And then there were more exploratory projects. My coworker Clare Stanton, our friends in metaLAB and I built Alterspace, which was about allowing library patrons to have autonomy within public library spaces. And so what does that look like? The idea was that a lot of patrons that use public libraries tend to be people who don't have a lot of autonomy in their lives, be it unhoused people, children, or folks that don't have access to private spaces in general, so how can we make public spaces more comfortable for them? And we worked with a sound artist and we did light shows. It was really fun.

Are there particular projects that you're excited about working on at MIT?

I am really interested in seeing what the sonification folks build! That whole world is completely new to me, all of those teams are working on producing really interesting work, like making sounds out of shapes. I'm also working on two projects here, both of which I'm really interested in. One of them is an extension of something that I did at LIL with coworkers Clare Stanton and Andy Silva. It's called The Wanderverse Project, an exquisite corpse poetry project that will hopefully get people exploring stacks again in libraries, because they don't tend to do that with e-catalogues anymore. And then the other one is working with Eric Robsky Huntley, a lecturer at the urban planning department (DUSP), to make a dashboard out of recent eviction and building ownership data. So that should be really interesting.

Part of your background is as a designer. How does that impact your work as a programmer and developer?

I aspire to be a person who thinks about accessibility, whether that’s A11Y web accessibility or approachability overall. How can you present something that is kind of technologically obscure or burdensome in a way that's first and foremost interesting to people who don't have a background in something, but that’s also usable? So accessible in various ways. One of my majors in undergrad was communication design. It was very annoying that they kept calling it that (as opposed to graphic design), but I suppose it makes sense in retrospect, because the idea of design, the hopeful idea, is that you communicate (well). It's kind of like the first line of defense—if something looks obscure or like it’s obfuscating the subject matter, you're not even gonna look at it. Aspirationally, I want to put beautiful things out into the world. So much of what we do here is visual. You can't escape that. Even when you're creating a toolkit like the Sonification Toolkit, in the end there's an interface. You're either staring at something that's slapped together, or you're staring at something that's thought through and methodical. I try to be considerate about those choices, but I think it's hard to be when you're moving so quickly a lot of times.

Could you talk a little bit about what it's been like working with students so far?

Surprisingly not as scary as I thought it would be! People tend to be very, very, very enthusiastic about MIT students here, and the students are so lovely and nice and interested. (And so busy!) It's been wonderful! Part of working with web tools is that the web moves really quickly and so you encounter unknown situations, no matter who you are, even if you're a person who very much stays on top of the latest and greatest technology that you’re working with. Working with people who have the flexibility to recognize that—what more can you ask for? So it's been great.